It's Not About Pit Bulls, Exactly

I started a new documentary project today -- on Street Photographers. Research and planning have gone on for a while, but today was the first day of rolling tape.

So I went to Central Park with students from my Extension Class at Hunter College. It was a beautiful day, and there was an event for dogs and their owners. Picture hundreds and hundreds of dogs, most of exceptional breeding. It's Manhattan, after all.

The idea was to get some footage of the process of making photographs in public. My students were great, experimenting with many ideas and shooting some very interesting pictures. It was fun to see them work.

The strange part was that the park was filled with Documentary crews. I ran into some who were there to shoot pieces on dogs, on dog owners, on dog fashion, and on the wackiness of how dogs are treated in affluent and decadent Western culture.

And I ran into a woman who is shooting a documentary. She asked what we were shooting -- well, actually "Who are you shooting for?" -- and then didn't seem to listen to the answer. She was noticeably relieved when it turned out not to be a documentary on Pit Bulls, though. I know this because when I asked her what she was shooting she seemed a bit hesitant to tell me, and then told me it was on Pit Bulls -- almost in a whisper.

Was she afraid to admit this in the middle of the sea of dog owners? (You have to figure it might be some sort of expose....) Or was she afraid we might steal her idea?
Posted by Ted Fisher at 1:08 PM No comments:

When I got to hear D.A. Pennebaker speak a while back, he mentioned that you might want to do some living before making documentaries. He said it in a more elegant way than that, mentioning Hemingway along the route, but he said it nonetheless.

I like that idea, of course. And it's a great excuse for almost anything, as well.

"12th and 3rd in Brooklyn" (Directed by Iris Lee, Maya Mumma and Yours Truly) screened again -- this time at "The New School Video Show" on Friday night.

I actually did not know in advance that it was definitely going to show, so I gave no notice to anyone. And then I was sick and didn't attend the screening. (So the tree fell, but I never heard it....)

I went to the 2005 version of that show (not very long after I moved to New York) and thought: "I could make something for this...."

A lot has happened since.
Posted by Ted Fisher at 7:24 AM No comments:

If You Buy Only One Book This Year

Well, it might be because that's all you can carry....

It's finally out: 480 pages of street photography happiness. Elliott Erwitt's Personal Best.
Posted by Ted Fisher at 7:25 PM No comments:

A Decent Week All Around 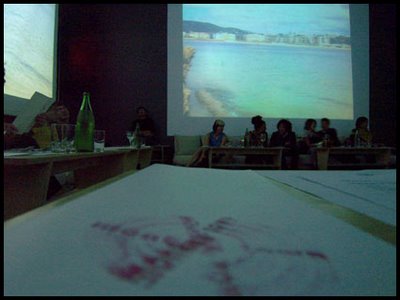 I had a good week. On Thursday, I saw D.A. Pennebaker present his films in person. He showed his early "Daybreak Express" and "Baby" -- both excellent short documentary films. It's nice to get to be in the same room as one's heroes...

Then on Friday night Maya Mumma, Iris Lee and I screened our new documentary short 12th and 3rd in Brooklyn (New York Portrait #1) at Monkeytown. Great place. You sit on slinky couches, drink wine, and look up at the four huge screens.

Also: finally bought an HDV camcorder: the JVC GR-HD1. I've unpacked it and charged the batteries....

Above: Monkeytown is great, as long as you like to watch things, eat, drink, and sink into a couch.
Posted by Ted Fisher at 10:53 AM 2 comments: