Was a little too busy to post the Frugal Traveler: Looking Back episode when it went online. There's a new episode on the way...
Posted by Ted Fisher at 8:54 PM No comments:

Or, Learn To Hurdle 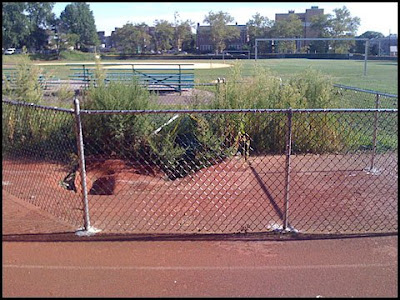 So here's how I read this: first, there was flooding, then the track sank, then they built a fence around it, then they realized they couldn't trim the weeds near the fence with the riding lawnmower.

So the important thing is to draw lane 8 at the track meet, because otherwise it's tough going.
Posted by Ted Fisher at 2:34 AM No comments:

My short film Notebook on Santas & Elves will be screening Tuesday, September 23 at Antimatter Underground Film Festival in a program called "Creative Violation."

I like that title, and I also like the fact that there's a Jem Cohen video in the program. Sounds like a fun night. Wish I could go....
Posted by Ted Fisher at 9:01 PM No comments: 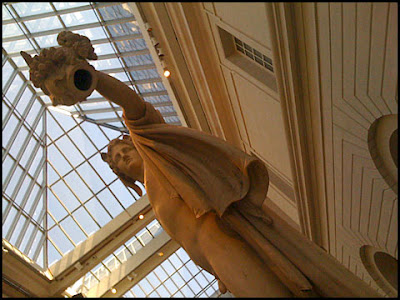 After a lot of slowing down and dropping out, my cable modem bit it last Monday. Right at a time when I had to do online grading, post files for review, write stuff, and communicate on several projects. When classes were starting, also.

The service from my cable company was terrible. It could have been resolved in a day. It took until Sunday at 4 p.m. and would still be going on if I listened to their advice. It cost me money, time, at least one gig, and a weekend that could have been a lot of fun.

I tried Plan B, too -- visit Starbucks and other places with wireless access. It worked, but it was problematic. Starbucks was just like always -- tough to log on, expensive, and it included a screaming child at 10:30 p.m. Guess he'd had a lot of coffee.

I'll also no longer visit the local coffee house that charges extra if you plug in the wall. They have a smug note about not stealing their electricity from them. They can turn off their lights, for all I care -- I won't be back because of that note.

Now I have a new cable modem -- went to Queens to get it -- and things are running. But I'm about a week behind.

Above: we dropped into the Met on Sunday, to celebrate Mrs. New York Portraits passing the Second Exam. This seemed like the most appropriate work to photograph.
Posted by Ted Fisher at 11:00 PM No comments:

And How Was Your Week? 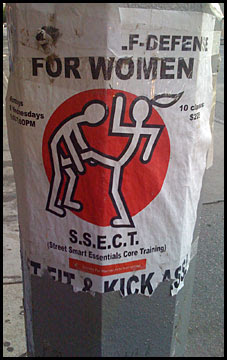 Email ThisBlogThis!Share to TwitterShare to FacebookShare to Pinterest
Labels: photographs

Posted by Ted Fisher at 2:35 PM No comments: