In just a few days, we'll be moving to Southern California. So, I'll be shifting from blogging at New York Portraits to this blog. Details very soon.
Posted by Ted Fisher at 8:43 PM No comments:

Goodbye to Some of That 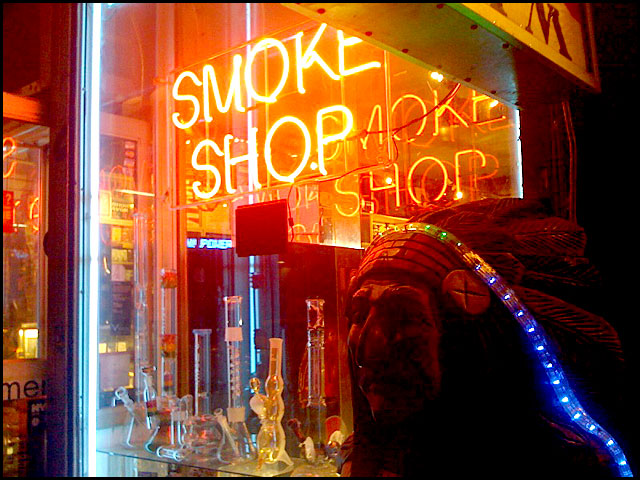 Last night we had a bit of a going away gathering.

One issue leaving the city raises: Will I need to change the name of this blog?

Above: an iPhone snapshot on Thompson near Bleecker.
Posted by Ted Fisher at 11:02 PM 1 comment:

Panasonic GH1 "Stress Test" A from Ted Fisher on Vimeo.

Posted by Ted Fisher at 6:54 AM No comments: 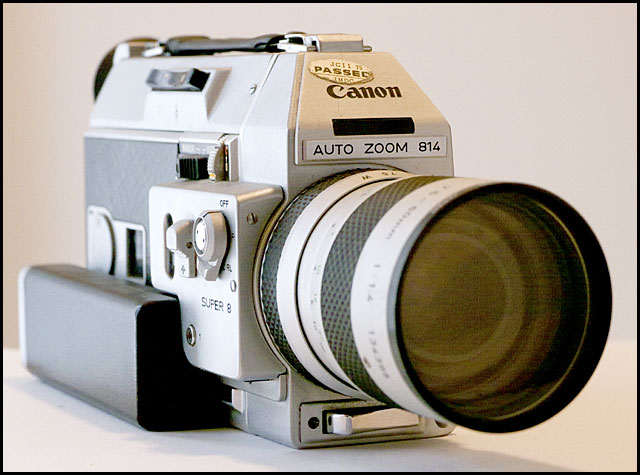 I'm puzzled by the way the pejorative "tool" migrated from "working for the man, part of the problem" to "easily used fool" to "penis."

I know the Boomers were full of crap. Still, at least they recognized that some types of achievement were, in the end, at the service of corrupt interests with a hugely negative impact on our world. Getting an advanced degree in Chemistry: amazing and good; working for Dow to make Napalm: horrifying and bad.

This is how I first, at a fairly young age, heard the phrase "You're a Tool" used.

It colored my academic experience: one should be loose and cool. The uptight bastards obsessing their way to a perfect score would win, but the prize was a corporate deskjob making some widget that would kill / poison / numb the masses.

Of course, as a teacher I know that concepts, ideas and facts tend to devolve. For example, I recently had to look up the biography of a filmmaker, and after some research found that the site ranked first on Google said:

"Mr. X was born in the City of Y." Which is not true. A few sites had published:

"Mr. X was born in Z, outside the City of Y." This was repeated as:

"Mr. X was born near the City of Y." Then corrupted as:

The same thing happens with subtle insults. Not understanding the accusation "Tool" made against those who would be a cog in support of a mainstream culture that funded endless war, allowed corporations to poison the environment on a massive scale, celebrated sexism, racism, courseness and overconsumption, my generation began to use it in blunter and less-nuanced ways.

"He's such a Tool" might be said when someone was used or fooled, thickheadedly unobservant of the game. And it began a slow gloss toward:

Which is, at a base level, somewhat accurate. Except the implication now was that the "Tool" didn't understand the subtle, finer points of the accuser's standards for social success. The "Tool" was not comprehending or able to achieve what was expected in the accuser's society.

Unfortunately, that's the Society of Corruption, the original target of the insult.

"You're a Tool!" = You think you are achieving something great, but you're serving the Mainstream's interests. I'm rebelling against that culture, I think it is corrupt and destroys lives, souls and the planet. Playing in the background: the LP version of "Masters of War."

"You're a Tool!" = You are the person Fooled, Conned, Taken, instead of the one smart enough to do the Fooling, Conning, Taking. (Playing in the background: the VHS version of "Wall Street" with Gordon Gekko saying "Greed is Good" while Napster downloads "Down with OPP" in the background.)

"You're a Tool!" = There's no way you are going to win this Reality TV Show without gaming everyone, and if they're too dumb to know that they're being played it's their own fault. Read: my only obligation is to the Stockholders.

I realize that's a bit of a Rant, but here's why I'm thinking about this: filmmakers love to talk about Tools. The very concept is at the heart of Independent Filmmaking -- or any kind of filmmaking. The "Tools" are ALWAYS about to give new abilities to anyone / everyone / an entire generation.

And then they don't.

Above is a photo of Super 8 camera, aimed at high-end consumers, that included features low-budget filmmakers embraced. Many were purchased with that in mind.

The current fascination with Hybrid DSLRs -- now able to make 1080p HD video, allowing the use of interchangeable lenses for a film-like depth of field -- isn't that different.

But ... not if the filmmakers simply want to rehash the same sexist, corrupt, greedy, needy, self-centered pointlessness. It can be done at a profit, yes. But it makes you a Tool.
Posted by Ted Fisher at 12:24 PM No comments:

A Profile in Profiles 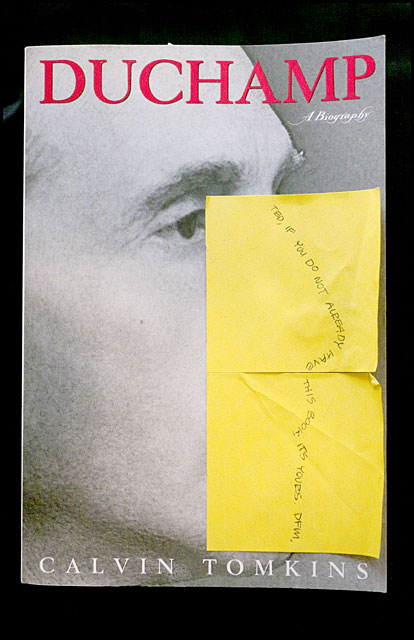 Was packing books into boxes for our move to California when I ran into this.
Posted by Ted Fisher at 10:23 AM 1 comment: 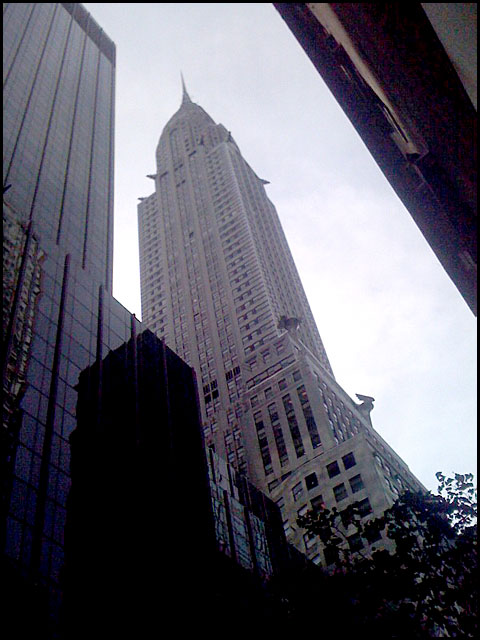 Shot a mini-documentary this week, near Grand Central Terminal and the Chrysler Building. It will be a long while before I get to putting it together, but it was a good time. Details sooner or later.

Above: an iPhone snapshot of the Chrysler Building, taken after a quick visit to 99-Cent Pizza.
Posted by Ted Fisher at 5:43 PM No comments: 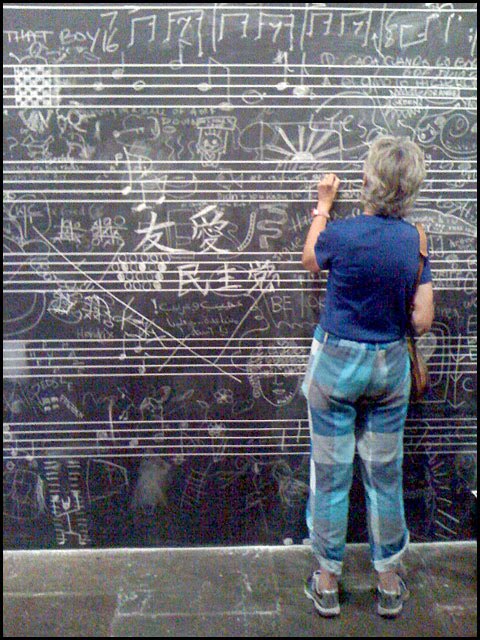 Above: a snapshot from The Whitney, taken Friday night.
Posted by Ted Fisher at 5:13 PM No comments: 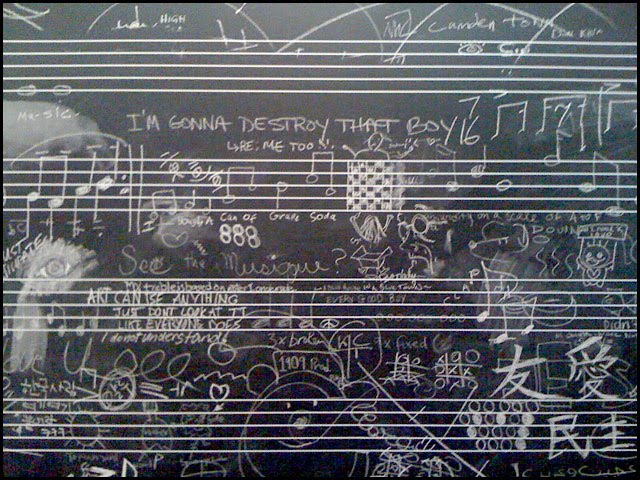 Went to see the Christian Marclay: Festival exhibition at the Whitney Museum of American Art.

It was entertaining enough, and we happened to catch it during "Screenplay" -- a performance with two turntabilists performing with a video work. Not sure I see enough of a distinction from an organist playing with a film -- or a pianist, or a theremin player -- on this one. There's just not enough of an aura to playing a turntable, in my opinion, to push this piece into the "needs-to-be-in-a-museum" category -- though it would be a fine match for any performance space.
Posted by Ted Fisher at 8:22 AM No comments:

Email ThisBlogThis!Share to TwitterShare to FacebookShare to Pinterest
Labels: exhibitions

At Least Until The Next Time 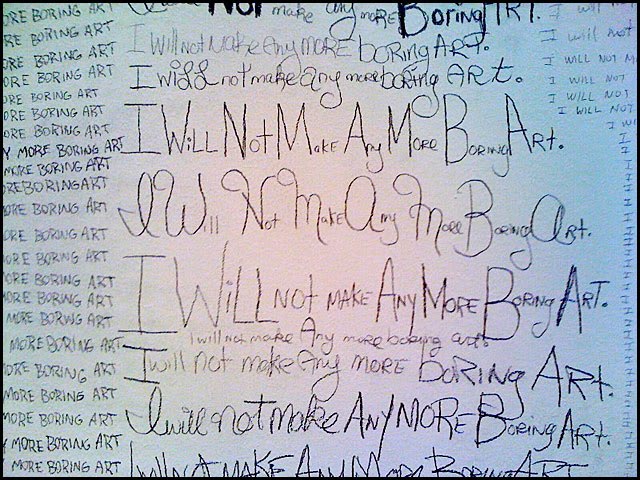 Above: Baldessari revisited at The Whitney.
Posted by Ted Fisher at 11:09 AM No comments: 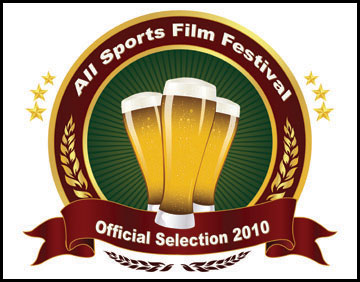 Our short documentary Hoop Springs Eternal screens at 11 a.m. today at the All Sports Los Angeles Film Festival at Raleigh Studios' Fairbanks Theater. It's in "Short Series A."

The film features hoopers Jenny McGowan and Loren Bidner, and was made with Linda Goldman, Chris Corradino, and Maya Mumma. (If you happen to catch it, give it a rating at IMDb.com -- or even post a micro-review.)
Posted by Ted Fisher at 8:24 AM No comments:

Our documentary short Hoop Springs Eternal will screen at the All Sports Los Angeles Film Festival on Saturday, July 10th at Raleigh Studios' Fairbanks Theater. It's showing in "Short Series A" which starts at 11 a.m.

I won't be able to attend, but just for fun I'm going to move to Los Angeles a few weeks after the screening. It seems like a nice place.
Posted by Ted Fisher at 12:14 PM No comments: