Icarus in Fort Worth at Tribute Film Festival 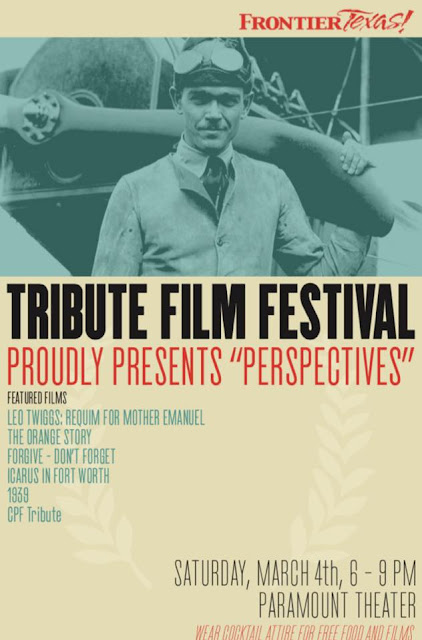 Our short documentary "Icarus in Fort Worth" screens Saturday at the Tribute Film Festival in Abilene, Texas. Tickets are free.


The Tribute Film Festival is a three-day, three-night film festival. Events include screenings of selected films in the Frontier Texas theater, a three-day independent filmmaking seminar, social/networking events throughout downtown Abilene, and a festival gala at the historic Paramount Theater to screen the award winning films on Saturday evening March 4th.


The film's logline is:


A Texas daredevil faces danger to become a wingwalker and stunt pilot, risking everything to expand his fame and build a Hollywood movie career. The true story of Ormer Locklear, the greatest pilot you've never heard of.


It features the voice of Joshua Sherman.

Posted by Ted Fisher at 7:57 AM No comments: Links to this post

The Texas Sun and the Festival Run


The Texas Sun from Ted Fisher on Vimeo.

Our short documentary "The Texas Sun" has now screened at film festivals for one year. One full year. The film went to:


and was also nominated for:

If you enjoy the film, please give it a vote at IMDb.

Posted by Ted Fisher at 3:09 PM No comments: Links to this post