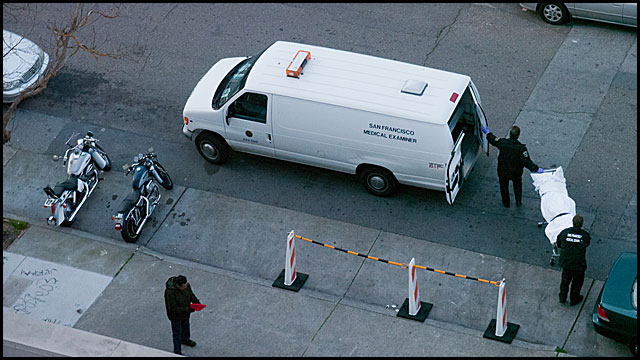 I'm just going to be honest. There's no other way to tell this story, and there's no reason to hide the facts behind making a point. It's just what happened.

On Monday, January 10th, my wife and I saw that a woman had collapsed on the sidewalk. Another woman was on a cell phone calling for an ambulance. She seemed to know the woman's name. We stayed until the paramedics and firefighters arrived.

Later, I looked out our window expecting to see the ambulance drive away, taking the woman to the hospital. But a very long time passed, and eventually the ambulance and firetruck moved away. I found myself hoping that I had somehow missed them wheel the woman on a gurney into the ambulance. I also thought it might be possible that they had moved her to another vehicle, just outside of where I could see.

Instead, as the post-sunset light on the street turned blue, the Medical Examiner's vehicle arrived.

I don't see any way it helps anyone, but it's a photograph of what happened.
Posted by Ted Fisher at 8:49 PM