Let's All Be Free 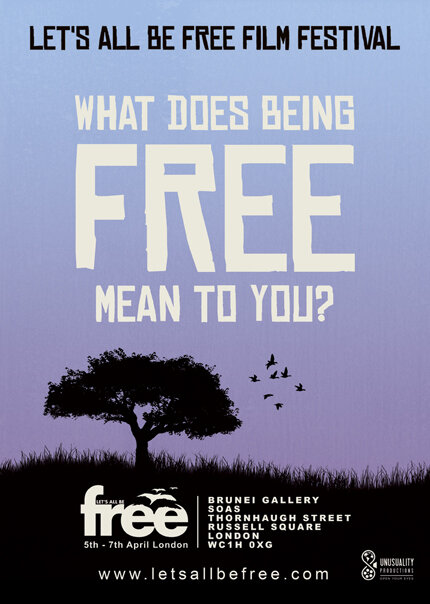 Some notions take a long time.

In January 2010, I had an idea for a mini-documentary, and decided the best way to approach it would be to find an interview subject on Twitter. Believe it or not ... it worked.

As you probably know, however ... there are always complications. In fact, in this case, there were many delays. The film -- less than five minutes long --wasn't completed until March 03, 2012. From there, the filtering process of finding, entering, and being accepted into film festivals has meant that no one has seen it yet. Finally, though, we've got the good word: two festivals have accepted the film -- Rolling on the Floor -- and will screen it.

Today, though, I want to direct your attention to our April 5th screening in London at the Let's All Be Free Film Festival.

The festival will be held in Central London at the Brunei Gallery, part of the School of Oriental and African Studies at the University of London.


Let’s All Be Free Film Festival aims to explore and celebrate what it means to be free. We seek to create a comfortable and open forum that will encourage constructive dialogue and debate around the notion of being free, with the aim of creating greater understanding and awareness around this vital issue. We want to use this enhanced knowledge and insight to implement a tangible, positive force for good in the world around us, and inspire others to do the same.

One of the ways we want to achieve this is through creative expression – through the powerful and timeless medium of film. We seek to find the best, boldest and brightest cinematic expressions of being free, and showcase them to the world.


(Above: poster for the festival designed by Tim Leete of Creative Meld.)
Posted by Ted Fisher at 10:59 PM

Email ThisBlogThis!Share to TwitterShare to FacebookShare to Pinterest
Labels: documentary production, film festivals, lets all be free film festival, rolling on the floor