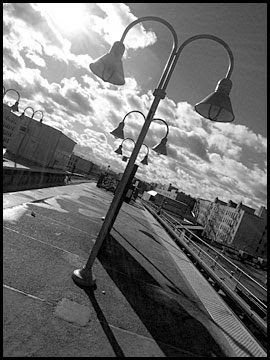 My experience of The Bronx is a strange one: I arrive on the 4 train, walk a few blocks on West Burnside, and teach my class at Bronx Community College.

I'm vaguely aware of facts about the area: it's the poorest urban county, the U.S. census says the population is 51% Latino (primarly Puerto Rican and Dominican), and there is a strong connection to Africa. I hinted at that last fact in my post on Lucky Dube, and it has become a visual fascination for me: there are traces, but they blend in and become muted.

"West Africa is the most frequent region of origin for immigrants to the Bronx. U.S. Immigration and Naturalization Service data shows that in 1996, about two-thirds of those Ghanaians arriving in the United States, and nearly three-fourths of those naturalized, live in The Bronx. Many have clustered in Bronx communities, including Morris Heights, Highbridge, and Tremont."

Morris Heights is the area just below Bronx Community College.

Above: Burnside Avenue Station on Monday morning, looking toward Manhattan.
Posted by Ted Fisher at 6:30 AM