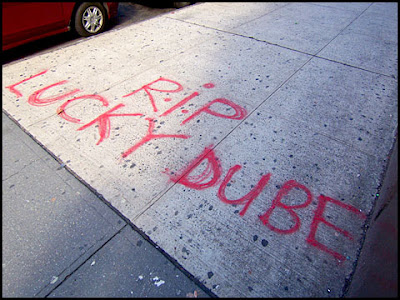 "Correspondents say the killing of the 43-year-old singer has shocked South Africans who are already accustomed to one of the highest murder rates in the world. Music producer TK of TS records and a friend of Dube's told the BBC the killing was tragically ironic."

There have been stories lately noting that New York's murder rate has dropped to a new low. If there's one place where a murder in South Africa will enter the New York mind, however, it's The Bronx.

Above: photographed just off Burnside on Monday.
Posted by Ted Fisher at 9:02 PM