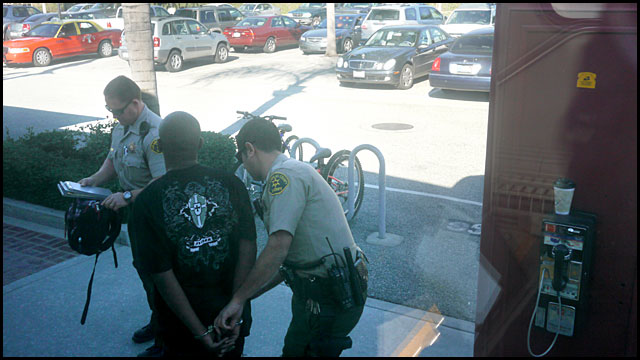 Ever file out a negative carrier?

Here's the thing: at one time, film negatives were placed in a metal holder and then the holder was placed in an enlarger. The image was projected down onto photo paper, held in place by straight-edged blades that could be moved to crop the image. (In other words, the blades covered the paper and could therefore stop part of the projected image from reaching the paper. You could slide these blades to decide where to crop.)

Many documentary photographers, however, felt cropping went against their approach, and so they would slide these blades outward to let the "full frame" of the negative's image hit the paper. No cropping. They often went one step further, filing out the negative holder to be a little larger, thus avoiding accidental cropping caused by the holder.

The rough black line this produced as a border to the image became a bit ... fetishized. It was code for a certain type of "true" or "raw" photography.

Of course, looks get stolen and in the 1980s you saw many fashion photographers adopt the filed-out carrier -- so an incredibly planned, stylized, controlled image used the language of documentary in ads for perfume. It looked good.

Today, many people adopt the edge look a filed out carrier produces even in digital photos, and even in cropped photos. It means little now.

But consider the image above. I've presented it full frame -- my camera was set on 16:9 aspect ratio. I was riding on the Metrolink into Los Angeles when I saw the scene outside the window, and I quickly snapped a few shots with a 20mm lens on a Panasonic GH1. (The 35mm equivalent would be a 40mm lens.)

It includes a reflection on the window, and I feel it's important to explain it was taken from the train. But crop in a bit -- just inside the reflection, making a nearly-square image -- and do a bit of adjustment to the look of the image and one could easily believe it was taken standing near the action.

But then ... is it still a "document"? Does it change what it serves as "evidence" for? Is it a news photo at that point (keep in mind I don't know the situation at all, or anyone's names or the final outcome of the situation) or an art photo?

And what if, just off to the left, it turned out there was a movie camera recording everything, and that this was really a scene for a TV show?