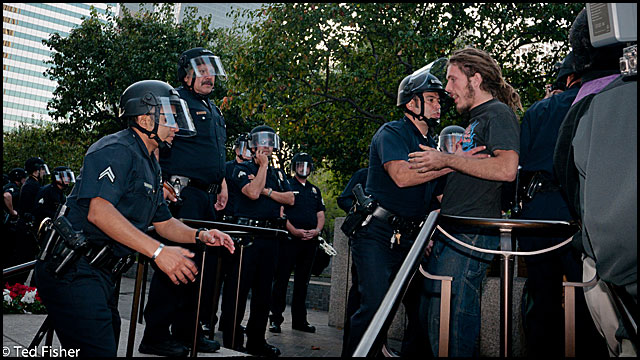 L.A.P.D. officer Gutierrez pushes a protester during the "Occupy Los Angeles" protest at Bank of America Plaza in Los Angeles on Thursday, November 17, 2011.

(Photographer's note: I have been photographing "Occupy Los Angeles" events since the first day, and I have been generally impressed with the L.A.P.D.'s handling of the protests. I have heard accounts that are less positive than my impression, and I leave it to others to document those cases. In the case photographed above, however, I think it is important to make two notes: 1. The protester was not purposefully crossing a police line. He did not seem aware the staircase was not open, so his movement did not appear to be a purposeful challenge, but he did clearly move over the line the police were enforcing. There was inconsistency, however: several other people were allowed onto the stairs before and after the incident 2. The response was with open hands rather than batons and seemed appropriate. The protester was pushed hard, but I did not see any escalation after he was moved backward.)
Posted by Ted Fisher at 10:52 AM