A Pyramid, or a Sphinx 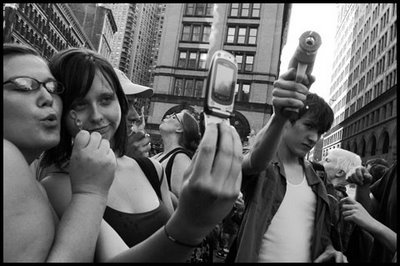 Well, what is it about a photograph that makes it alive or dead?

Garry Winogrand: How problematic it is! It's got to do with the contention between content and form. Invariably that's what's responsible for its energies, its tensions, its being interesting or not.

There are photographs that function just to give you information. I never saw a pyramid, but I've seen photographs; I know what a pyramid or a sphinx looks like. There are pictures that do that, but they satisfy a different kind of interest.

Most photographs are of life, what goes on in the world. And that's boring, generally. Life is banal, you know. Let's say that an artist deals with banality. I don't care what the discipline is.

Above: an image from my street photography portfolio Waiting for the April Fool's Parade (copyright 2006 Ted Fisher).
Posted by Ted Fisher at 10:36 PM