The Untimely Death of Henri Cartier-Bresson 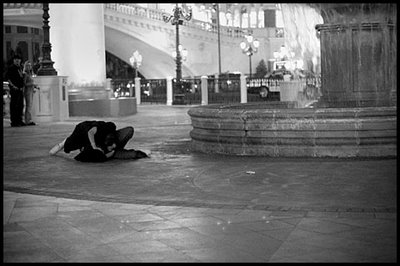 Popular Photography has an interesting tidbit on Henri Cartier-Bresson:

The French photographer had been captured by Nazis in 1940, and he had spent 35 months in various prisoner-of-war camps. After two unsuccessful attempts at escape, he finally succeeded. In 1943, he dug up the Leica he had buried on a farm near Vosges and began taking pictures again.

By the end of the war, however, rumors reached America that Cartier-Bresson had been killed. MoMA's photography curator, Beaumont Newhall, went to work on a major show. Then, in 1946, it was learned that he was still alive. Cartier-Bresson decided to come to America to work on the exhibition -- a show that helped to establish him as a major figure in photography and art.

Above: an image from my street photography portfolio Waiting for the April Fool's Parade (copyright 2006 Ted Fisher).
Posted by Ted Fisher at 10:30 AM