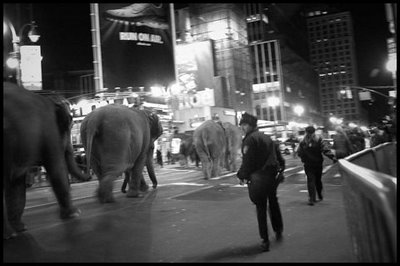 If there were an actual April Fool's Parade -- instead of just a way of looking at passing daily life -- it would be the perfect test for whether one wants to practice Street Photography or Documentary Photography.

In my take -- and I'm perfectly willing to let everyone invent their own version -- two photographers might show up at the same parade. The first, practicing documentary photography, will stay with the parade, and end up telling some story out of it, though perhaps not the obvious one....

The second, engaged in street photography, will be distracted by something, somewhere off to the side of the parade route, something vaguely beautiful but difficult to see....

Above: an image from my street photography portfolio Waiting for the April Fool's Parade (copyright 2006 Ted Fisher).
Posted by Ted Fisher at 9:10 PM